Apps are a vital part of today’s music scene

From JS Bach to Jay Z, music has always been both on the front line of creative expression and the subject of much interest by investors and businessmen keen to cash in on the medium’s wide popularity. In today’s interconnected, mobile era this is more true than ever and music apps form a large segment of the mobile app market. This is in large part due to the convenience that mobile applications can bring to your music experience; whether you’re interested in producing music, listening to it or even both, music apps can have a role to play in making that process simpler and more accessible.

‘Music apps’ is a broad term though, covering everything from small, personalised smart audio player apps, through to giant music exploration networks like Spotify and Google Play Music. It could also cover guitar tuning apps, sheet music apps, concert booking services, karaoke apps and many, many more. On their App Store, Apple divides music apps into a range of different sub-categories and while the names change, at the time of writing these include: “Music discovery”, “Get your tickets”, “Learning music” and “Mix and remix”. There are plenty of other apps available which are harder to categorise though; it seems that whatever your audio needs might be, there’s someone out there offering a solution.

What’s on the market?

Let’s take a look at a few of the genre defining music apps to get a feel for the sort of potential that’s held by this type of application:

Genre defining music discovery apps include:
Spotify – probably the most famous and ubiquitous music, podcast and video streaming service around, Spotify excels at enabling users to share music with others and to make custom playlists.
Shazam – best known for it’s music identification feature Shazam now also offers access to song lyrics, music videos and more.
Soundcloud – as a publishing and distribution service, Soundcloud enables lesser known and aspiring artists to break out and get heard.

Genre defining ticketing apps include:
StubHub – owned by ebay, StubHub is the world’s biggest ticket resale and exchange market. Selling tickets for music concerts, but also for sports and other entertainment events in the USA, Canada, UK and Germany, they lead the field by a significant margin.
Seatgeek – offering aggregation services, Seatgeek is more fan-centric than Stubhub, allowing comparisons of different ticket seller prices. It’s service is worldwide.

Genre defining apps to help learn music theory and play an instrument include:
Tabs and Chords by Ultimate Guitar – offering a massive collection of tabs and chords for guitarists to play from, Ultimate Guitar use this app as an extension of their already popular chords and tabs website.
Tempo – there are a lot of good metronome apps out there, Tempo is the top selling competitor.

Genre defining apps to enhance producing and mixing efforts include:
Pacemaker – visually accessible and easy to pick up and use, Pacemaker brings mixing to the masses.
DJay 2 – a little more technical to get to grips with, but worth it for those looking to expand their DJing skills. Algoriddim, the music app developers behind DJay, are well established as top DJ app makers.

New and shiny vs tried and tested

For many businesses it may be that you know exactly what you’re looking for from your app because you’ve seen competitors bring out something similar: vinyl record stores want apps that let people browse their catalogue, online magazines want audio players that let them define the sound of their sub-culture, venues and events want apps that showcase what they offer and let people easily buy tickets.

On the flip side, there are plenty of novelty apps out there pushing innovative and sometimes quirky music solutions. From the recent popular wave of lip syncing apps headed by the groundbreaking Dubsmash through to visual music creators like NodeBeat, alternative approaches to interacting with music often grab the public’s attention, especially where social sharing comes as a deeply integrated element of the service.

Play with the big boys

Of course, if you want to enter the music discovery section of the market, you’re going to need something to really set you apart, it’s not unachievable though. You might think that big name platform services by the likes of Apple and Google, along with established mainstays of the music discovery app world like Spotify, SoundCloud, Pandora and Shazam have got the market firmly in hand, but the number of music player apps out there with hundreds of thousands of downloads and even millions of downloads is astounding. Find the right niche, the right experience, a new twist on an old idea or even a totally new way of doing things and you’ll find that this already bursting market still has a lot to give.

Let’s suppose you’ve got an original concept for a music app, what do you do next? What’s the process for transforming this idea into a reality?

Step 1 – Validation – You need to talk through your idea in depth with people you trust who understand the market. If you’re able to do this with your team / in house first, that seems like a good place to start, but at some point you need to bring the idea to a development outfit like eKreative to go over the nitty gritty. It might seem like a grilling, but don’t let it put you off, asking lots of questions about how the app’s going to work and answering them honestly is a crucial step along the way to making it a reality. eKreative offers free consultations and has validated a wide range of different ideas over the years, so reach out to us and begin the conversation.

Step 2 – Wire frames – Once we’ve got a validated idea ready to begin work on, it’s time to plan out the experience your users will encounter by planning the different screens of your app and determining the functions found on each screen and the navigation between screens. This phase is called wireframing because we create a model or blueprint of the app which lets us understand what the final product will be like.

Step 3 – Developing the MVP – Now it’s time for the developers to do their stuff and bring your idea to life. Notice that I call it an MVP (minimum viable product). You’ve probably got a lot of big ideas about where your app’s going, what it will be like further down the road, but as with any new product it’s key to get the basic version out on the market as soon as possible and then improve it based on what works rather than mapping out lots of great features early on and then discovering that the users approach your app differently to the way you expected.

Step 4 – Data based improvement – Once you’ve got your basic MVP out on the market and started getting some users, it’s time to start refining it, adding features and optimising what you’ve got. If your idea is for a start-up, this will be an ongoing process as you continually gain fresh data about the way your users use and want to use your app.

Here at eKreative we’ve got a great passion for developing intuitive custom apps to solve a wide range of problems. Making audio apps in particular is an area of work that we’re both experienced at and well equipped to handle.

Smart audio player apps allow influencers who produce regular audio content (eg. a podcast) to distribute their material in a personalised, easily navigable format. The app’s users get a notification every time new material is uploaded, in-app downloads allow for offline listening and a custom feedback system can enable full engagement with the apps users. These screenshots show an app of this sort that we made for top Christian influencer Simon Guillebaud: 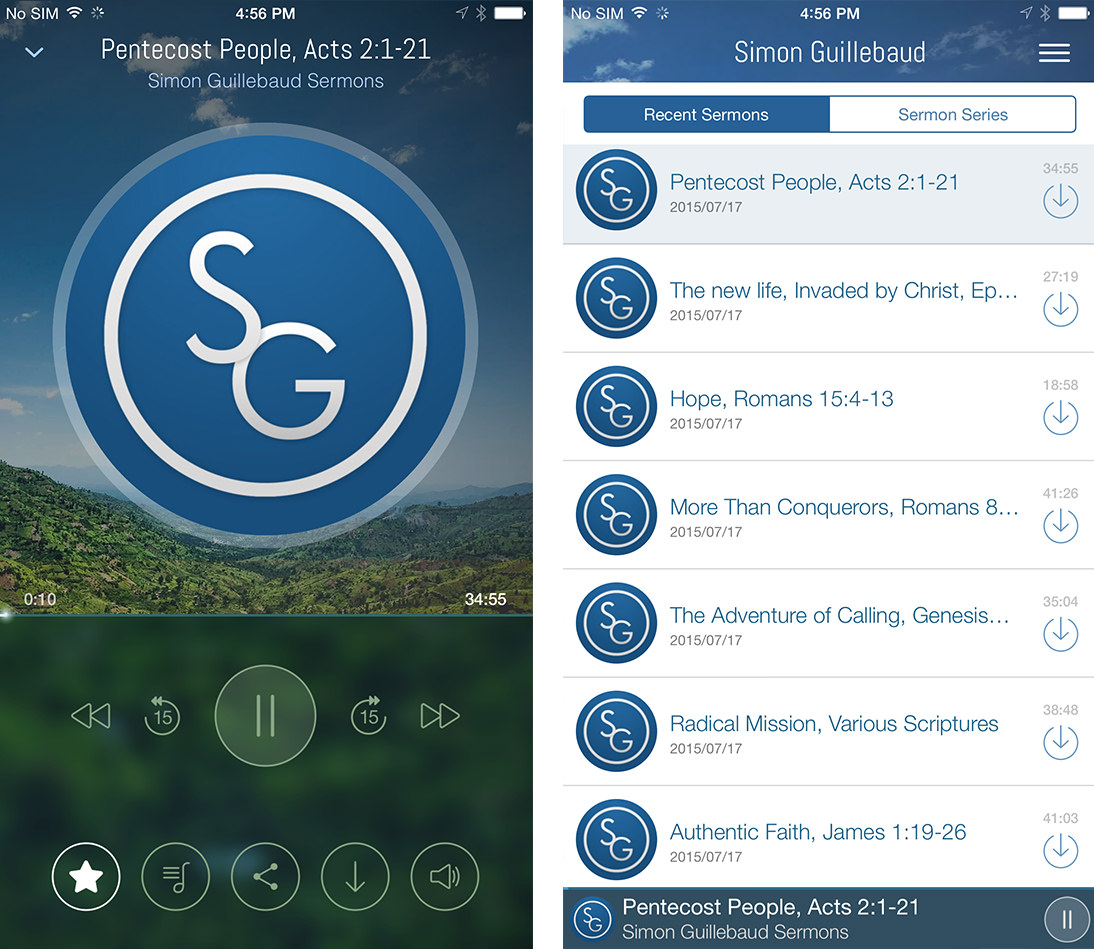 Live streaming apps have many of the same functions found in a regular audio player app, but also allow you to stream live audio directly to the app (eg. ongoing radio station coverage or a one off live event). This is exactly what we did in the case of the Hromadske radio app, a source of high quality citizen journalism covering the news in Ukraine: 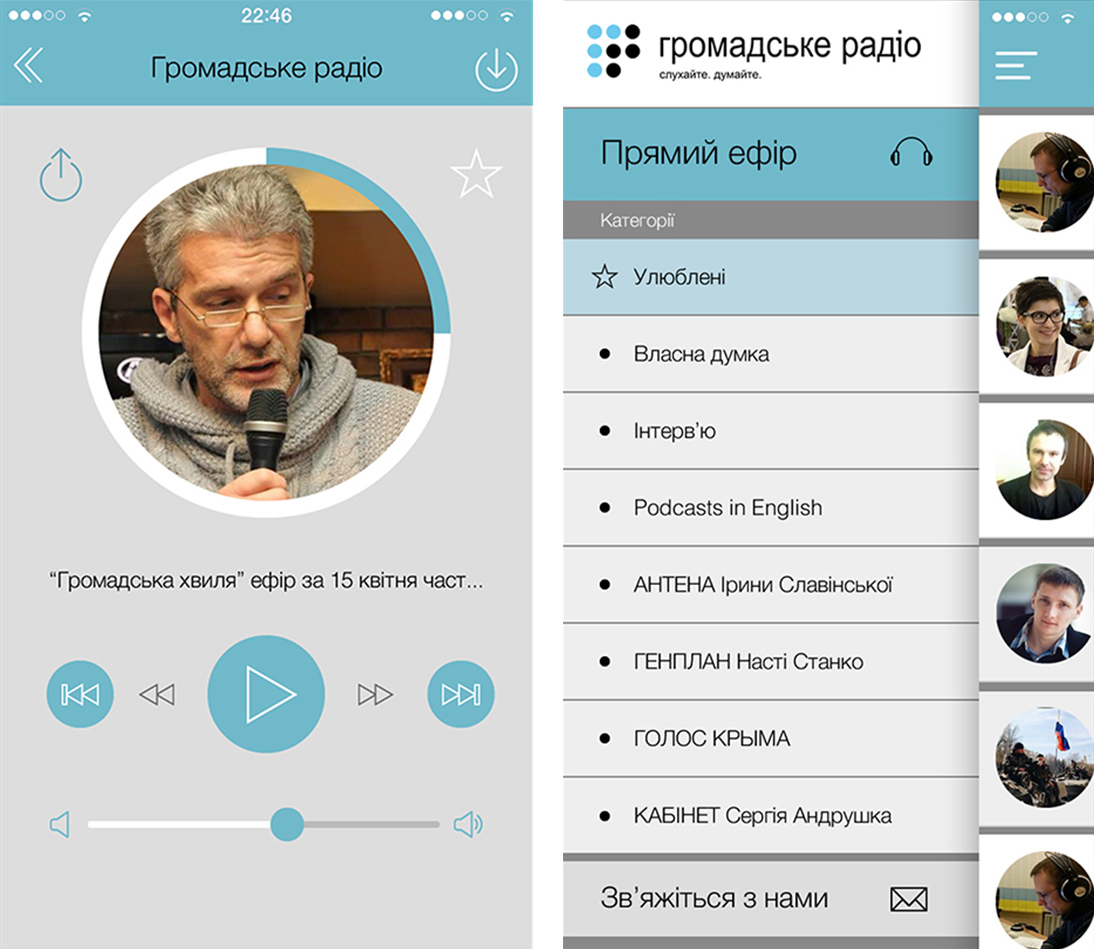 The cost of music app development

As with any other sort of app development, the question of how much it costs is a complicated one, with a lot of factors influencing the final totals from the complexity of the app, to the number of different platforms it will run on and much, much more. The best way to find out how much a specific app idea will cost to develop is to take it to a development outfit and get an actual quote. To put you in the right sort of ballpark, if you came to eKreative looking to make a custom audio player app that would run on both Android and iOS you could expect pricing to start around $5000. If though, you had a more complicated initial concept, a totally original idea, or wanted business development to be included alongside product development, the costs could potentially run significantly higher.

Obviously your key criterion in looking for a music app development company for your music app has to be to find an outfit capable of delivering the goods, but it’s not the only thing to keep in mind. We know that we’re up to the job, whatever the scale of the challenge, but then of course we would say that and so would a great many other companies. How can you discern that we (or any other potential development partner) really does have what it takes?

We’re confident that as you go through this process with eKreative you’ll find that we’re both friendly and communicative as well as professional and knowledgeable across all aspects of app development. In addition we produce great results, which in the end is what it all comes down to. So get in touch and let’s start turning your music app concept into the real deal.